Highlights: In Machine Learning, a backpropagation algorithm is used to compute the loss for a particular model. The most common starting point is to use the techniques of single-variable calculus and understand how backpropagation works. However, the real challenge is when the inputs are not scalars but of matrices or tensors.

In this post [1], we will learn how to deal with inputs like vectors, matrices, and tensors of higher ranks. We will understand how backpropagation with vectors and tensors is performed in computational graphs using single-variable as well as multi-variable derivatives. So, let’s begin.

Single-variable Calculus has made it easy and quite intuitive to perform backpropagation and computational graphs using scalars. If you are interested to learn how to perform these calculations check our post Computational graph and Autograd with Pytorch.

However, in practical applications, we do not often work with scalars. Instead, we work with vector-valued functions where vectors, matrices, and tensors of higher ranks come into the picture.

So, how do we perform the same backpropagation and visualize computational graphs for such vector-valued functions?

Let us start with the concept of single-variable derivatives.

Have a look at the visualization of the backpropagation process for a particular node \(f\).

For the node represented above, we have two vector inputs \(x\) and \(y\), of dimensions \(D_x\) and \(D_y\) respectively. These input vectors are producing an output vector \(x\) of dimension \(D_z\). This is how forward propagation works.

When we get into backpropagation, we make use of an upstream gradient as shown below.

In the case of this upstream gradient, the loss computed is always a scalar value, no matter if the input or output is scalar, vector, tensor, or anything else. This upstream gradient tells us how a small amount of change in each element of \(z\) affects the value of loss \(L\).

Now, within the node \(f\) itself, we have local gradients or the so-called Jacobian matrices. Again, these local gradients or the Jacobian matrices inform us how much the output \(z\) changes with respect to each of the elements of each of the input vectors \(x\) and \(y\) respectively.  Here, \(\left [ D_{x}\times D_{z} \right ] \) and \(\left [ D_{y}\times D_{z} \right ] \) are dimensions of a Jacobian matrix. Have a look at the updated visualization below.

Let us reinforce the concept of backpropagation with vectors using an example of a Rectified Linear Activation (ReLU) function.

As we can see above, a ReLU function is an elementwise linear function that outputs the value of input as it is, if it is greater than 0 (i.e., positive) and outputs 0 when the input value is below 0 (i.e., negative). 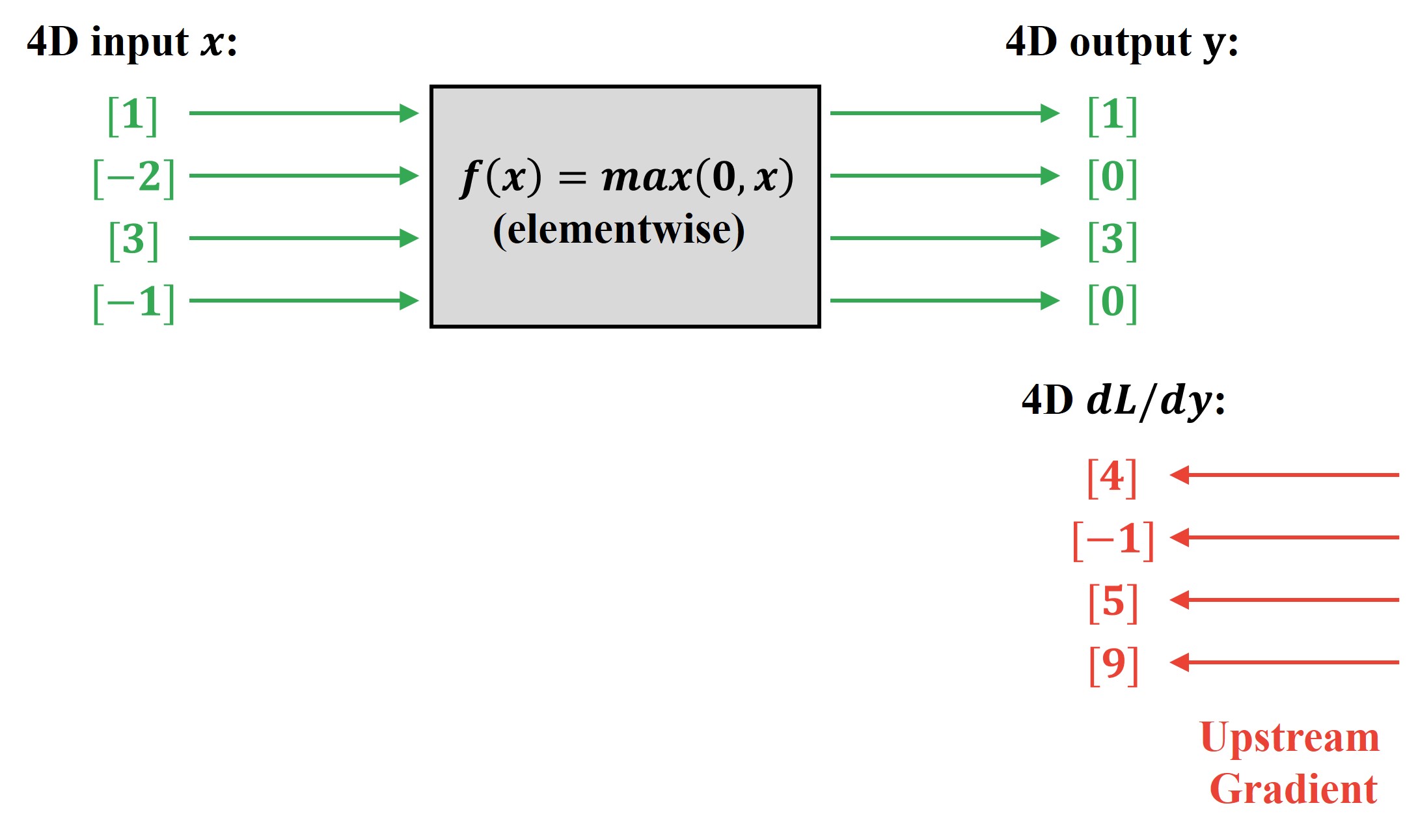 As we discussed earlier, this upstream gradient will tell us how much our Loss \(L\) will change with a small change in each element of the output vector of our ReLu function. These upstream gradient vector element values can be arbitrarily positive or negative and do not affect our backpropagation.

Next, our local Jacobian matrix tells us how our ReLu output vector elements change with respect to changes in each element of the input vector. 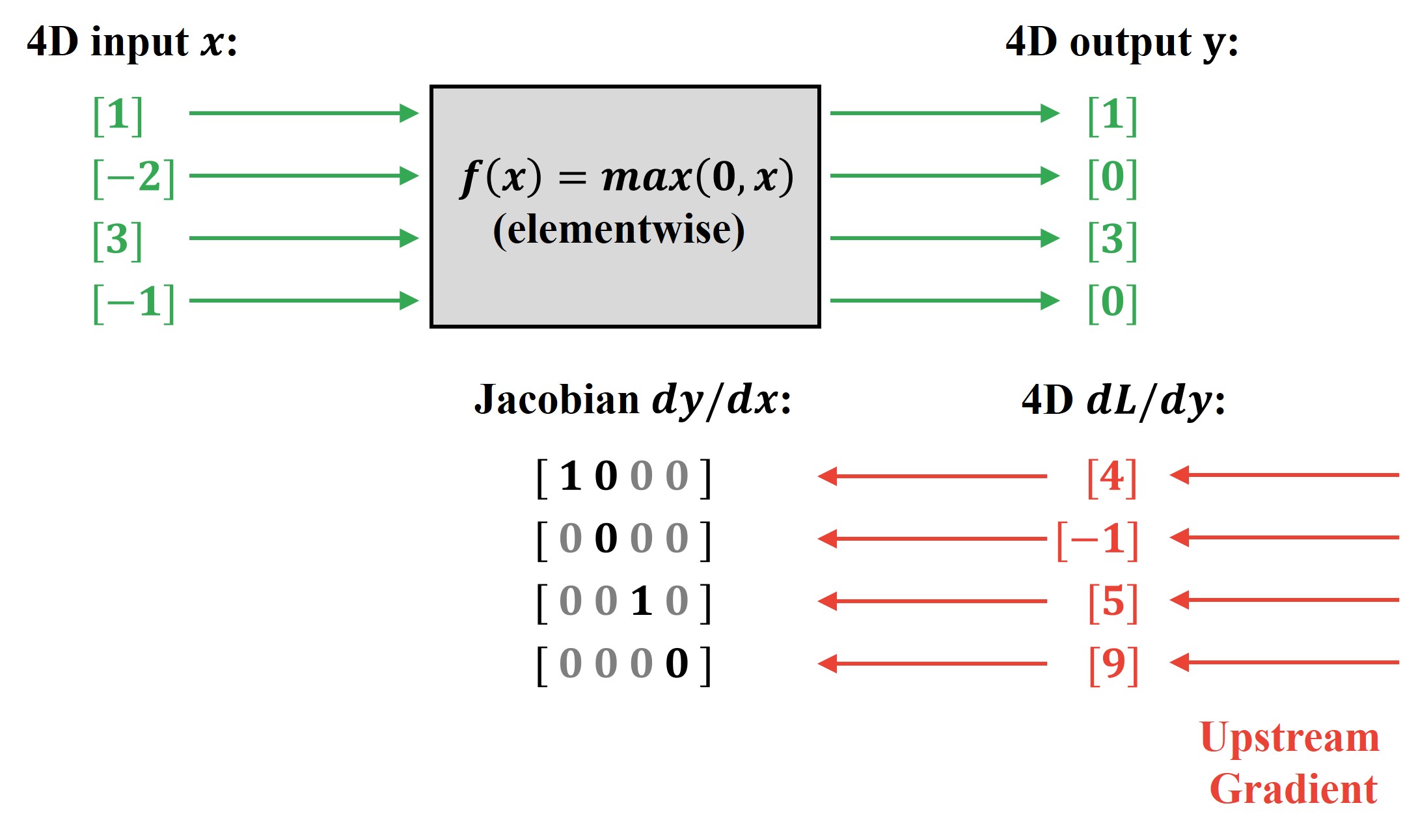 As a result, the local Jacobian matrix of the elementwise ReLU function is diagonal. 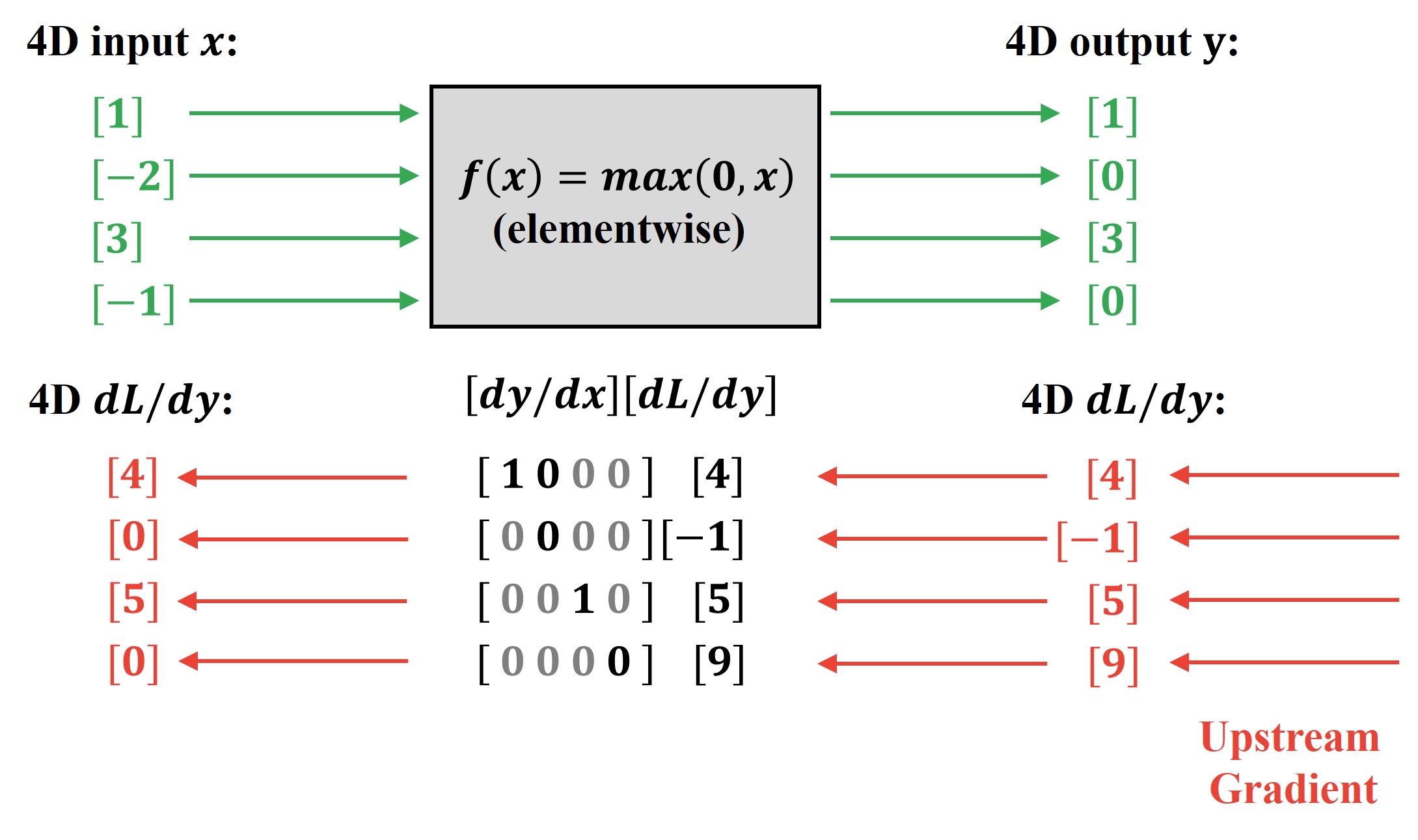 This downstream gradient vector will now serve as an input to another ReLU computational node and the process will continue.

Implicit Multiplication of the Jacobian Matrix

As we noticed above, the local Jacobian matrix of the ReLU function turned out to be sparse, which means it had a lot of zeros. This is a very common case with most of the functions that we use in Deep Learning.

In the case of the ReLU example above, this implicit multiplication process can be seen below. 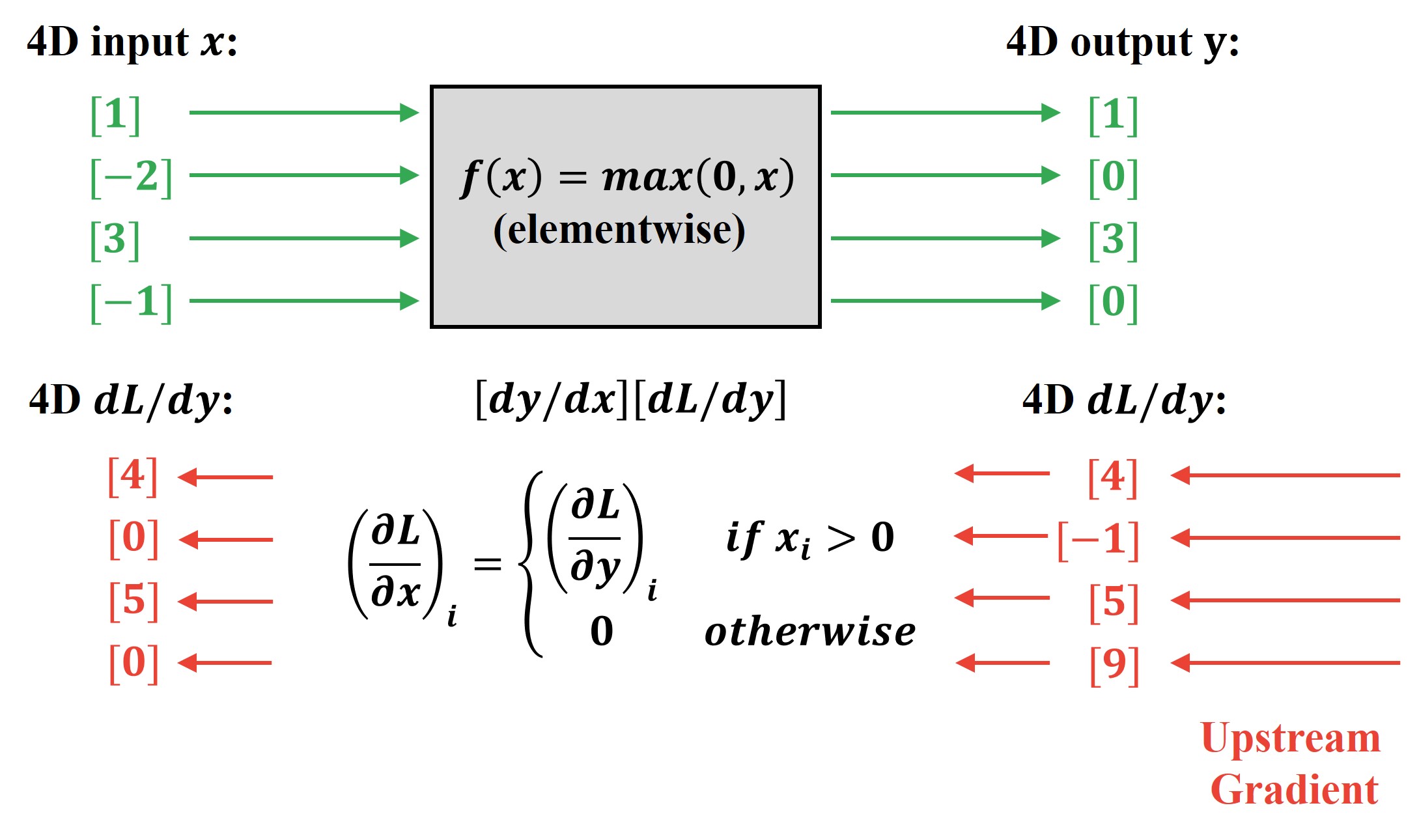 We have a fair knowledge of the backpropagation process when it comes to dealing with vectors. However, we often work with tensors with rank greater than 1, matrices, 3D tensors, 4D tensors, and tensors of other arbitrary dimensions, as well. Have a look at the visualization of a forward propagation in the case of a tensor node.

As we learned above, the loss \(L\) will still be a scalar and the gradient tensor of this loss with respect to \(x\) will be of the same shape as \(x\).

Following the same backpropagation method, we will input our upstream gradient to the local function as follows.

Notice how we have landed at the same Jacobian matrix problem again where the matrix is extremely sparse. Looking at the multiplication, it looks quite complicated to be able to express it into an implicit multiplication.

So how do we simplify this multiplication process? Let us understand using an example.

Let us see how we can obtain a general process for deriving backpropagation operations and simplifying the otherwise complicated high-order multiplications pertaining to arbitrary tensors. Have a look at the example given below.

We have received an upstream gradient \(2\times4 \) matrix from somewhere within the computational graph and it is inputted into the node. To calculate the \(2\times3 \) downstream gradient matrix, we need to figure out the local Jacobian matrices and then multiply them with the upstream gradient.

Usually, the calculation for local Jacobian matrices would look something like this.

Now, for a more common neural network, the dimensions will be quite big such as \(N = 64\) and \(D=M=4096\), and each Jacobian matrix will take up 256 GB of memory. Therefore, we need to perform multiplication implicitly and more efficiently to save up memory. 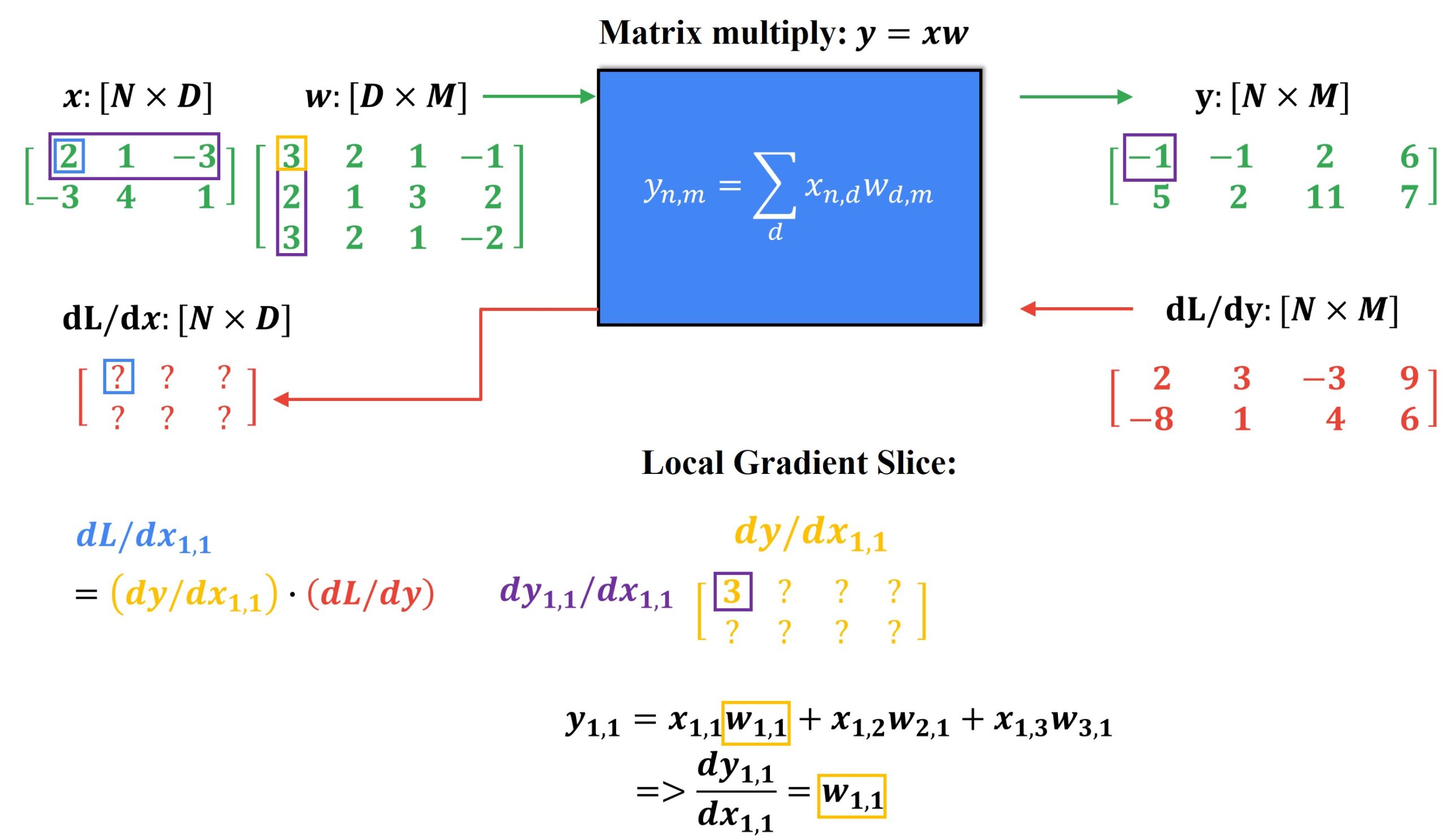 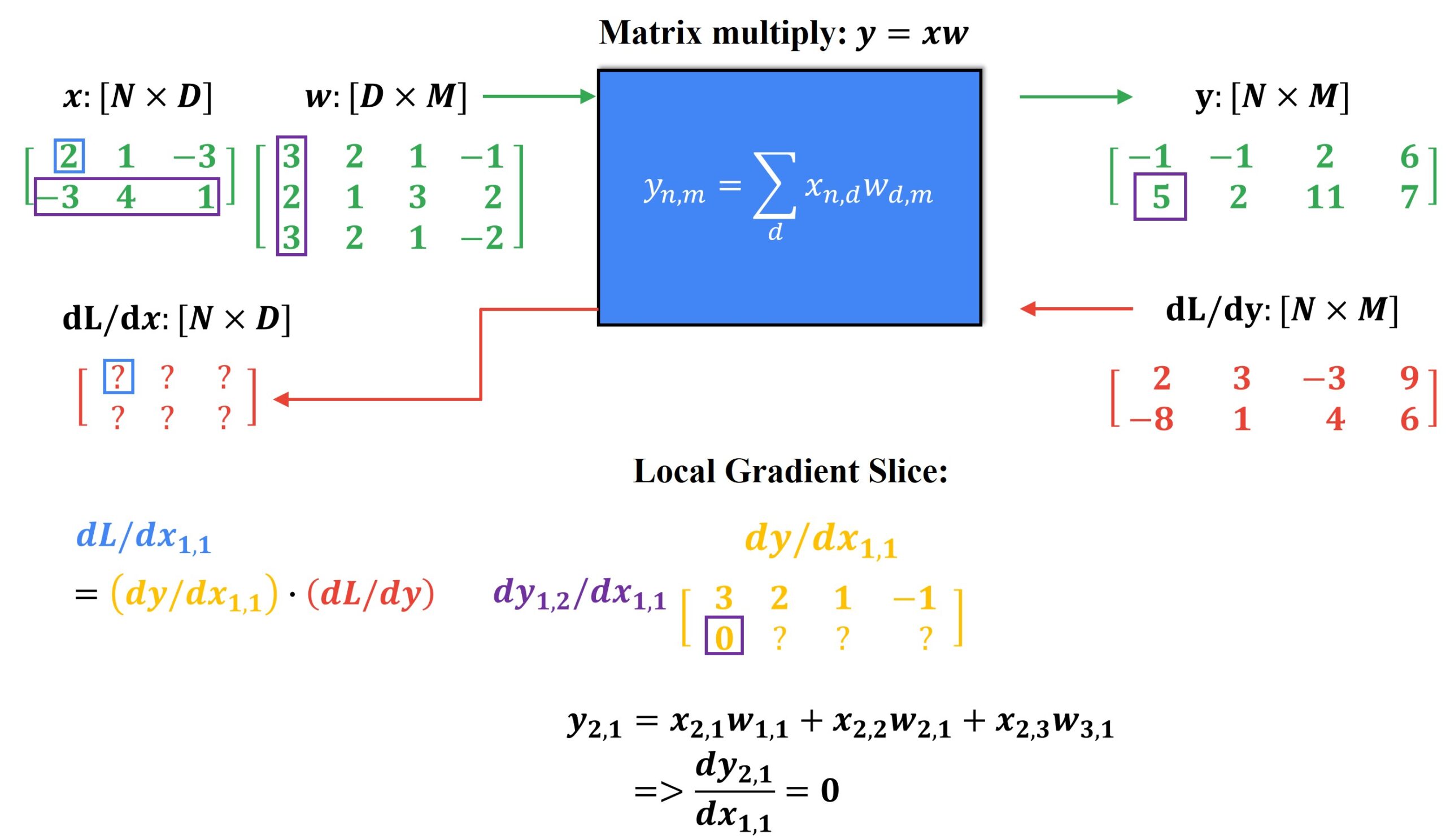 Using this local gradient slice, we can compute one element or a slice of the downstream gradient as shown below. 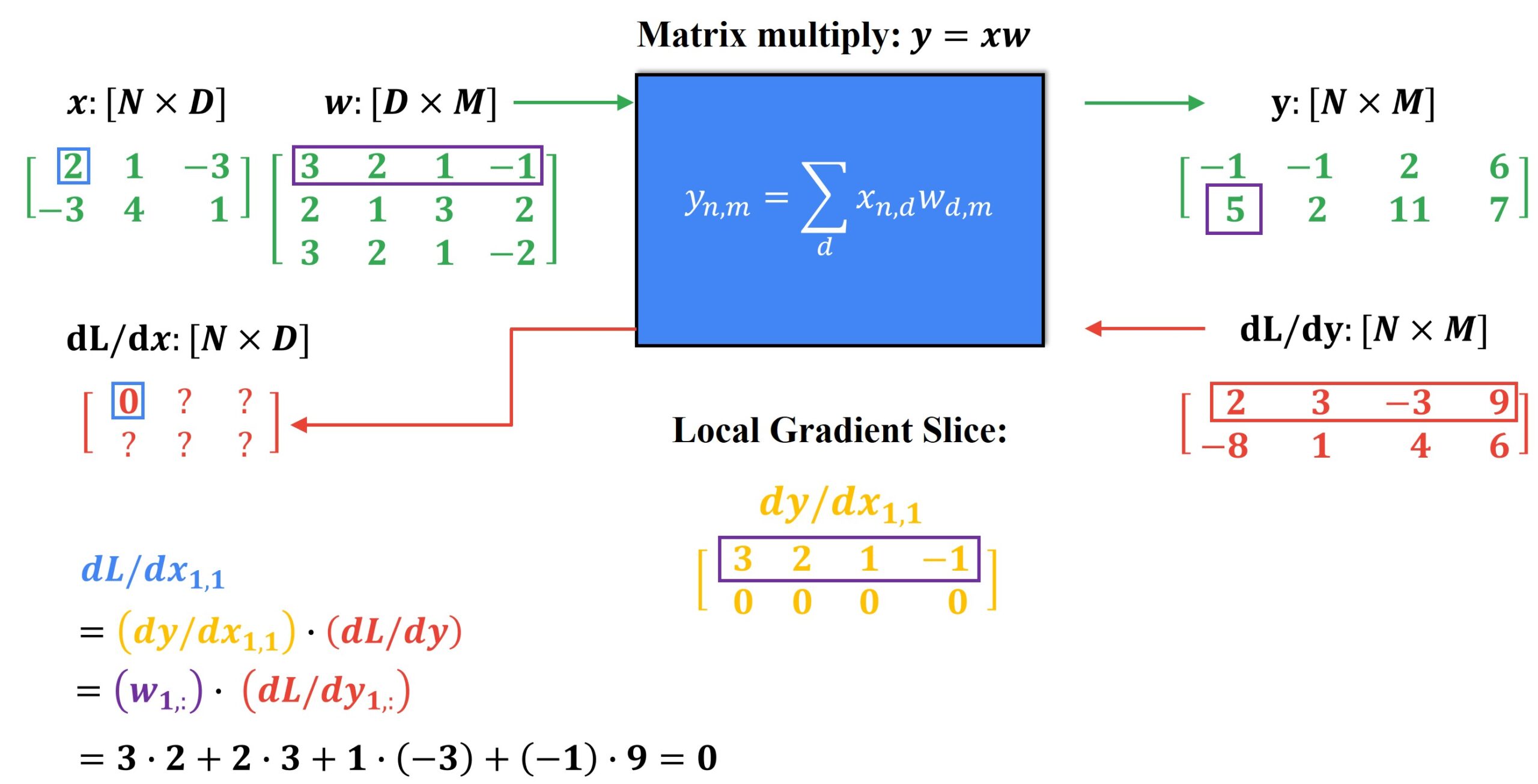 We can simplify this even further in the form of a matrix product, as given below.

So, this is how we perform an efficient implicit multiplication without forming the Jacobian explicitly. Now, let’s see how we can apply backpropagation with vectors and tensors in Python with PyTorch.

5. Backpropagation with vectors and tensors in Python using PyTorch

First we will import the necessary libraries.

In the first example, we will see how to apply backpropagation with vectors. We will define the input vector X and convert it to a tensor with the function torch.tensor(). Here, we will set the requires_grad parameter to be True which will automatically compute the gradients for us.

Now, let’s see how to apply backpropagation in PyTorch with tensors. Again we will create the input variable X which is now the matrix of size \(2\times3 \). We will also create the weight matrix W of size \(3\times4 \). Then, we will multiply X and W using the function torch.matmul(). In this way, we will produce the output Y of size \(2\times4 \).

Here, we can check the shape of the input matrix X, weight matrix W, and output matrix Y.

Now we will create the upstream gradient dl_over_dy with the following code.

Finally, we can apply the backpropagation step using the .backward() function and calculate the downstream gradient.

As you can see we obtained the same result as we did previously in the theoretical part of the post.

Well, that’s it. You now possess the basic understanding of backpropagation in computational graphs, not just using scalars but also vectors, matrices, and tensors. Now, you can work with tensors of any arbitrary dimensions by just keeping one important thing in mind: always go for implicit multiplication. Before you close the tab, let’s quickly revise today’s tutorial post.

We have come to the end of another fantastic concept. We hope you are learning as fast as we are making these posts. If you have any conceptual doubts, feel free to comment on this post or write to us directly. We will continue to learn great machine learning and deep learning concepts with many more such interesting posts. So, stay tuned and keep propagating! 🙂